DOUBLE FOR TYCO BMW AT OULTON PARK MAY DAY MEETING

A double victory for Tyco BMW at Oulton Park was the perfect May Day tonic for the Northern Ireland based team. Tommy Bridewell’s opening race Superbike victory and Alastair Seeley’s Pirelli National Superstock 1000 series top step was a first for both on BMW Motorrad machinery this season.

Unfortunately Bridewell crashed out of the lead in race two, but with other leading contenders also failing to finish, the Wiltshire racer’s victory moves him up to fifth place in the championship standings. Michael Laverty was eighth in race one on his Tyco BMW S 1000 RR but fought bravely to fourth in the second encounter. He also moves up in the championship standings to seventh just 13 points behind his team-mate.

Tommy Bridewell: “It was great to get the first win on the Tyco BMW, but hell I had to work hard for it. I knew Brookesy was there and was expecting to see a red bike on the last couple of laps but I think we were stronger in the second part of the lap and I’m delighted to be back on the podium and winning races. The second race is disappointing as I really did feel I could break them and did nothing different from race one and slipped off. Despite that I’m leaving Oulton full of confidence as we now have a Tyco BMW that I know is going to be competitive at all rounds, so the championship campaign really did begin for me this weekend. The boys in the team deserve praise for all the hard work and late nights, but I know they are also pleased we are now where we belong in this championship – fighting for wins.” 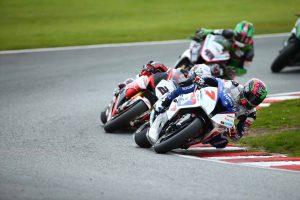 Michael Laverty: “This weekend was a huge step in the right direction for me. We found a fundamental problem that has been the root of all my issues in between races today, so race two was like starting with a new bike. I may have got a lucky fourth with a few crashing out, but I am a happy man tonight because I’m confident I will be in a position to fight for wins from here on in. It’s been a frustrating opening three rounds but it’s nice that we now have the answers. Congratulations to Tommy and Alastair on their wins today. They both showed what what the Tyco BMW S 1000 RR is capable of.”

Alastair Seeley: ‘This weekend was the perfect boost prior to the North West 200 and I think I answered the questions with my pole position and the win, would I be holding back before going to Portrush. The Tyco BMW S1000RR is feeling more like my bike every time I ride it, and having watched Tommy winning today on the Superbike is confidence inspiring heading to the NW200 next week. Thanks to the team for another big effort and the big crowd of sponsors and fans for turning out to support us.”

Philip Neill: “All together this was a morale boosting round for everyone at Tyco BMW. Our weekend started in perfect fashion with William winning the Tandragee 100 Road Race and our BSB boys certainly didn’t disappoint.

“Tommy ran at the sharp end all weekend and when it came to racing he really showed his ability and the strength of the BMW Motorrad S1000RR. Without a slow speed slip off in race two he may well have left Oulton with a double victory.

“Michael is slowly building confidence as he finds the ideal set up with the BMW S1000RR and a key change for race two appears to have boosted his confidence further. We know he is much better than the current results have shown and fourth in race two is a good indicator of the progress he and his team have made. It surely won’t be long before we witness Michael’s full potential.

“Alastair is really getting to grips with the S 1000 RR Superstock machine and pole position and the race victory is exactly what he needed after our run of bad luck recently.

“BMW Motorrad, Tyco Security Products and all our associate sponsors have shown great faith in us and it feels really good to begin to repay that faith this weekend.”

FRONT ROW FOR BRIDEWELL AND POLE FOR SEELEY AT OULTON

TYCO BMW ALL SET FOR OPENING PRACTICE AT NORTH WEST 200