Alastair Seleey’s fifth place in the Pirelli National Superstock 1000cc class was the pick of results at round two of the British championship for Tyco BMW, and but for a small electrical problem just two corners from home – it would surely have been victory for the Ulsterman who dominated the race in the closing stages.

In the British Superbike Championship Tommy Bridewell fought valiantly to sixth place in race two after crashing out of the opening encounter, and Michael Laverty took points away from race one, on a weekend his will openly admit he is keen to put behind him.

On his Superstock result, Alastair Seeley said: “We made changes for the race and I felt comfortable on the S 1000 RR after a decent enough start. I led pretty much from lap eight right until the last lap, and coming out of Graham Hill and up towards Surtees I knew I had the race won. Unfortunately the bike cut out, which we now know was a problem with a wire shorting out underneath the seat unit. But it could have been a DNF, so we will take the positives from rolling across the line in fifth, as we know how strong the package is already for this campaign.” 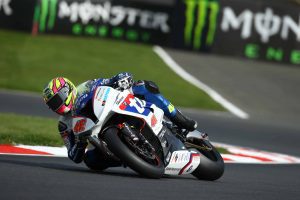 Tommy Bridewell: “It was disappointing to crash out of the opening race, but I was really pushing and giving it my all, and I got knocked about a bit. Sixth in race two is not where we want to be, but it’s progress and full credit to the team for a big effort. We now have a couple of weeks to improve all round for Oulton Park.”

Michael Laverty: “It was a character building weekend, but I’m really disappointed at my lack of pace. Brands Indy is one of those circuits, where if you’re not fully comfortable on the bike you will be exposed, and unfortunately that’s what happened to me. The results are not indicative of the work behind the scenes by the team, and I’m confident we will find a solution that will allow me to exploit the strengths of the Tyco BMW S 1000 RR very soon. We will test a revised set up later this week at Oulton Park, which I’m hoping will get us back on track before round three there in a fortnight’s time.”

Philip Neill – Team Manager: “Once again we will take the positive from a difficult weekend. Alastair Seeley was odds-on to take our first British championship win on the new S 1000 RR, only to have a technical issue towards the end of the final lap.

“Tommy had a solid weekend and without a crash in race one, he looked certain to come away with a pair of top six finishes. Unfortunately we are still struggling to find the set-up Michael is looking for to allow him to deliver his full potential. However we will keep working hard and now look forward to a further test ahead of Oulton Park and round three. Thanks as always to our hard working crew and to our sponsors who came out in force at Brands Hatch to support us.”