The Tyco BMW team returned to action at Snetterton for round four of the British Superbike Championship. A strong showing in the Superstock class from Keith Farmer saw the Northern Irish rider deliver a hard-fought performance aboard the BMW S 1000 RR to claim a fourth place finish. The Clogher contender recovered positions after dropping to the back of the pack following action taken to avoid an incident on the first lap.  Keith maintains his third place position within the overall championship standings with a healthy 27-point advantage over fourth place.

The 2.99-mile Norfolk circuit proved to be a frustrating one within the Superbike class.  With the Tyco BMW team providing a good set-up to the BMW S 1000 RR, combined with a second row grid start for Michael Laverty in race one, optimism was high for a podium finish.  However an incident at the second turn of lap one saw Michael being taken out of the race by another rider which left him with a difficult task ahead for race two from a fifth row grid start (P14). Christian Iddon also fell victim to the incident during race one which pushed him to the back of the pack leaving him to battle through from 18th , putting in a superb ride to cross the line in ninth place.

With top ten finishes for both Christian Iddon (eighth and ninth) and Michael Laverty (ninth), both riders have maintained their championship positions of ninth and tenth respectively.

The team will now continue their testing programme before moving on to Knockhill circuit in Scotland [6 – 8 July] for Round 5 of the British Superbike Championship. 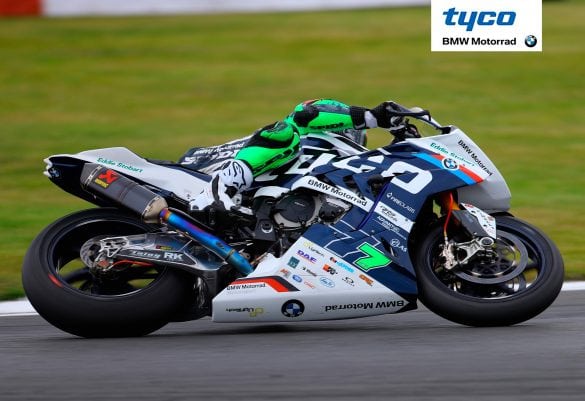 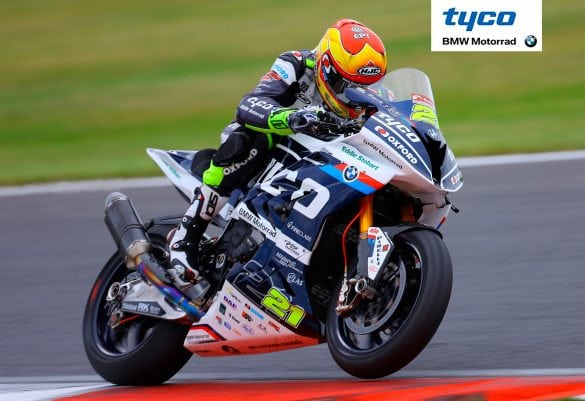 It wasn’t the result we were looking for but it’s some good solid points and we are still third in the championship.  In the first lap we got taken off the track and dropped to the back of the pack, it was a bit of a hard battle through because I was riding with guys I am not used to riding with and you can’t pre-empt where they are going, but to come the whole way from the back to fourth – we will take that!  The top three are now quite close in points, so we just need to keep our cool and keep finishing on the podium. Thank you to the whole Tyco BMW team and sponsors for their continued support.
Keith Farmer [4th / Championship Standing – 3rd]

I struggled a little during practice as it has been a long break since Oulton park especially with missing testing due to injury, however by qualifying I felt good on the bike.  Race one was a little disappointing as I got caught up in another rider incident, but I managed to stay on and bring her home in ninth.  Race two was completely different, we have made some small changes and I felt really good on the bike.  An unfortunate mid-race error hindered our chances, but I certainly had the pace for a fourth place.  For a good portion of the race we were the fastest on track, it’s nice to know we still have the pace, I’m excited now about the upcoming tests and getting to Knockhilll and back in the game.

It ended up being a frustrating race day from what had been a positive weekend. I got taken down on the opening lap of race 1 by another rider, losing the data from race 1 hurt us for race 2, I made a good start and got onto the back of the leaders, but I didn’t have the grip to match their pace. I ended up in a battle for 4th and had the pace to secure it but my front tyre tore up on the right side and over the last 5 laps I was a sitting duck and dropped back to 9th. We have some tests next week where I look forward to improving our base setting with the Tyco BMW
Michael Laverty [DNF & 9th / Championship Standing – 10th]

Unfortunately we did not leave Snetterton with the points haul we had hoped for today. To be fair each of our riders were caught up in others riders crashes which significantly affected the outcome and ended Michael’s race one at the second corner. It was great to see Christian return to racing after injury and we now look forward to Knockhill when we hope to see Christian, Michael and Keith fight for podiums on the Tyco BMW S 1000 RR.
Philip Neill – Team Manager