Once again the crowds turned out in force to the 2.18 mile Cadwell Park track for the eighth round of the British Superbike Championship.  Whilst there was no podium joy for the Tyco BMW team, there was some consistent riding and great pace from all riders with Iddon taking 5th and 8th placed finishes narrowing the points gap within the championship to just 8 points shy of the Showdown six.

Andy Reid experienced some personal career firsts and notable progress taking a double 13th and point scoring in both races of the incredibly close Superbike class, having never ridden the S1000RR at the Lincolnshire track.

Passing opportunities proved to be a difficult factor for all riders at the unique ‘twisty and tight’ circuit, but once again Josh Elliott showed good form in the Superstock 1000 class making his way from 9th place on the grid to take P5 and adding another 11 points to his championship tally.  This places him only 7.5 points behind 10th place despite only competing in 5 of the 9 rounds to date. 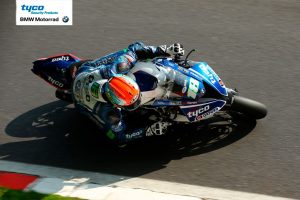 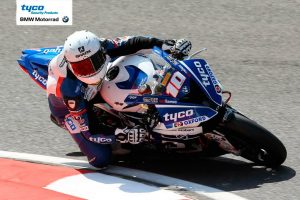 Team Manager Philip Neill: “This year’s BSB Championship is proving to be one of the closest battles for some time and after sitting out two rounds through injury Christian still has a fighting chance of finishing inside the top six at the showdown cut off point. We were hoping for better results today to be honest after a strong showing throughout Practice however solid points are important at this stage and we will make every effort ahead of Silverstone to ensure we are in a good position to fight for the podium places.

Andy had some hard battles this weekend including an excursion off track in race two. He was mixing it with some very experienced riders in both races and it was satisfying to see him take his first points in BSB.

Josh had another tough race after starting from 9th place on the grid after being caught out with the weather change in qualifying. He made good progress to finish in 5th place and we remain hopeful he can be back on the podium very soon”

Christian Iddon #24: “It’s been a little frustrating this weekend as I know I can run a better pace than most people out on track, when I found a gap in the pack I was putting in some really fast lap times.

The team have worked really hard to make us stronger in the braking zones as this is where we are a bit weaker, but such is the nature of this track this has held us back somewhat.  There are very few passing opportunities to enable us to utilise the areas in which we are stronger.

Having said this, we took P5 and P8 in today’s Superbike races narrowing the gap to the top six and feel we are in a strong position prior to Silverstone’s triple header to challenge for a showdown place”

Andy Reid #18: “I hadn’t set myself too many expectations this round as it is probably the most difficult circuit on the calendar but we had a great qualifying and placed third row on the grid for Race 1.  I had some very experienced riders and previous champions who had qualified behind me on the grid which felt fantastic being only my fourth outing on the Superbike S1000RR.

I feel there has been a big step forward this weekend and have entered the point scoring in both races at what is a really difficult track – so if this is anything to go by then I’m looking forward to the next round at Silverstone.  Once again thank you to the team for all the hard work they have put in this weekend.”

Josh Elliott #10: “We got a bad start placing 9th on the grid then dropping back in the first few laps which made it a very tough place to race as all riders are fighting hard at every corner on every lap.

I managed to get through most of the pack up to P5, my pace was much faster than that of the front three riders, so a few more laps and possibly we would have been fighting for a podium.

I’m looking forward to Silverstone as it is one of my favourite tracks, so we will be putting some hard work in before then and hopefully we will get back on the box”