PODIUMS AND POINTS FOR TYCO BMW AT CHAMPIONSHIP MIDPOINT

Keith Farmer retains his championship lead after a strong showing in the National Superstock series, whilst Christian Iddon posted two top six finishes in the Superbike class as the British Superbike Championship returned to Brands Hatch in Kent this weekend for the sixth round of the series, signifying the midway point in the 2018 season for the Tyco BMW team.

With less than one second covering the top 16 riders throughout the practice and qualifying sessions, the 2.433 mile Grand Prix circuit delivered a weekend of incredibly close racing. Christian Iddon scored two hard fought top six finishes aboard the Tyco BMW S1000RR, securing a further 21 points for his championship campaign. The Stockport rider currently sits in eighth place in the championship standings after Sunday’s two races.

It was a slightly more frustrating weekend for Michael Laverty, who finished race one in 10th after missing some track time in FP3 with a technical issue and qualifying in 13th place. In race two he fought valiantly to carve his way through the pack to cross the line in 11th after being pushed wide on the opening lap which forced him to the back of the pack.  Michael is placed ninth in the overall championship standings with 78 points, ten points shy of team-mate Christian.

In the National Superstock 1000 class, Keith Farmer continued his impressive form aboard the Tyco BMW S1000RR delivering a well earned second place in part one of Saturday’s two-part endurance race, crossing the line just 0.084 secs adrift of the victory. A DNF in the 17 lap second part of the race did not dampen the Clougher rider’s spirits as he bounced back to secure a further second place finish and another 20 points in an incident-packed race three.  With just five rounds remaining in the National Superstock 1000 class, Keith leads the overall championship with a 13 point advantage over second place. 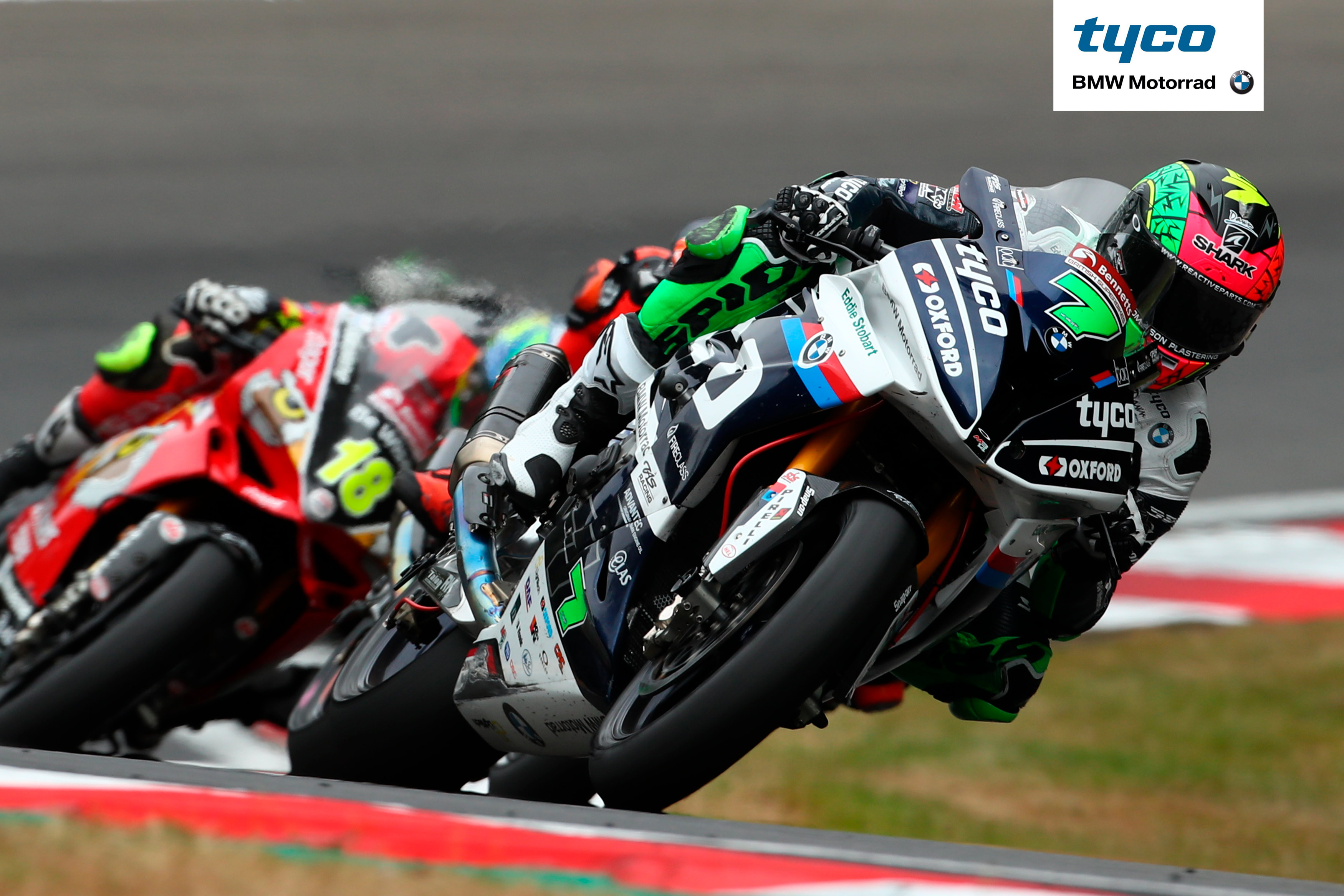 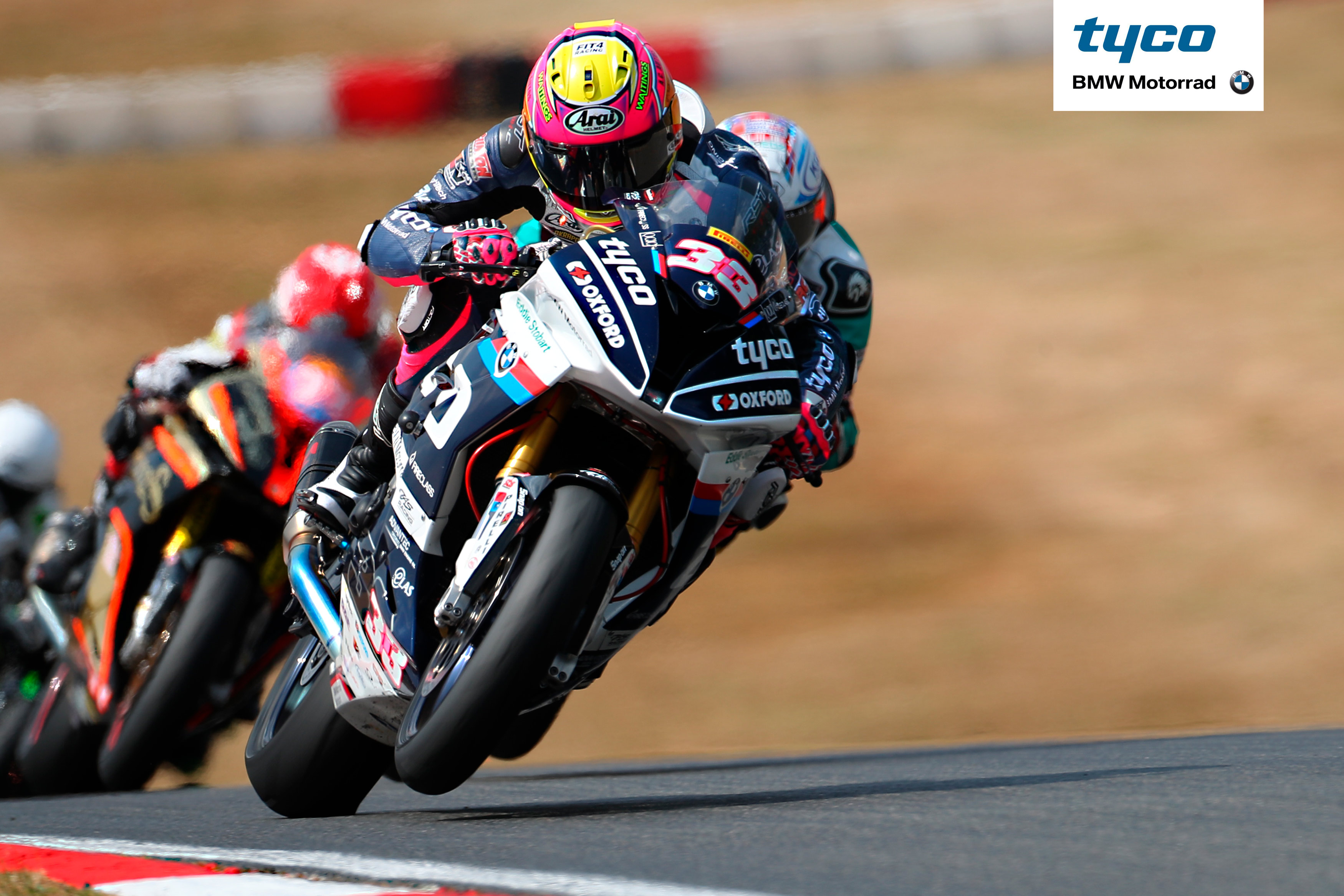 Another solid weekend for Tyco BMW with Keith increasing his championship lead and both Michael and Christian maintaining their challenge for a top six championship shootout position.

Keith showed great maturity in securing two second place finishes in some hectic Superstock racing, but for a technical problem in part two of race one, our points haul from Brands may have been close to perfect. The lap times in Superbike were closer than normal at the Brands Hatch GP circuit and Christian’s times where only fractions away from challenging for a podium finish in both races on his S1000RR. Michael wasn’t far away either after losing most of the final practice session. A slightly higher qualifying position and better starts in both races would no doubt have seen him challenge for top six positions.

Thanks as always to Tyco, BMW Motorrad and to all our partners for their valued support.
Philip Neill – Team Manager

Really good weekend overall, we did have a little bit of bad luck on the Saturday with a small mechanical which left us unable to complete the second part of the 100 mile race which was a bit frustrating, but that’s part of racing. We regrouped for Sunday’s race and came away with a strong second place which has helped us to extend our championship lead to 13 points, so all in all a good productive weekend with some solid points on the board. I’m looking forward to Thruxton, its a round I really enjoy so hopefully we can get a really good feeling again on the bike and keep moving forward. Once again thank you to all the Tyco BMW team, sponsors and hospitality staff – it’s been a mega weekend.
Keith Farmer #33 National Superstock 1000

It’s been another fairly solid weekend with two top six finishes.  It was good in terms of the championship fight as we took some points away from some of our showdown rivals so that was good, but at the moment we are just taking little bits of points away and we really need to start aiming for the higher positions and taking larger points margins.  I feel like we are getting the most out of the package at the moment and as a team we can be proud of that. All weekend we kept our head down, kept working and that is the plan for the rest of the year.  We will just do everything that we can to get the best out of every session, every corner and every lap and hopefully secure that showdown spot.
Christian Iddon #21 British Superbike

The weekend didn’t go as planned, the end results of 10th and 11th certainly don’t reflect the effort involved. I had a much better feeling with the bike for race two following a few set up changes between the races. Unfortunately a collision on the opening lap put me outside the top 20 and with a lot of work to do. The set up change was a big positive for me as I feel we have a good direction going forward, which we need to do next time out at Thruxton in two weeks time.