PODIUM JOY FOR IDDON IN OPENING RACE AT BRANDS

Christian Iddon signalled his intentions to finish the 2017 British Championship in style by delivering a podium-finishing performance onboard the BMW S1000RR in today’s opening race of the triple-header finale on the Brands Hatch GP circuit.

The team worked hard throughout free practice to enter race day in a strong position and in an incredibly close qualifying just 0.946 seconds separated the top 18 riders during Q2. Iddon continued to move forward in the closing stages of Q3 to secure a front row grid start for race one. 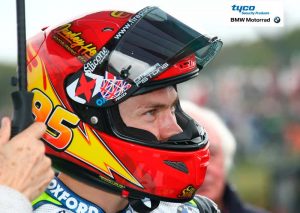 Iddon got off to a flying start in the race, slotting into second place and on lap two made a decisive move on Josh Brookes to claim the lead. The race was then red flagged for an incident and when the race restarted the Tyco BMW team lined up on pole position.

A flying start put Iddon into the lead on the opening lap before he slipping back into second, but maintaining a pace to hold the position and not be challenged in the closing stages.

Iddon will start on the front row for tomorrow’s second race of the triple-header weekend.

Team Manager Philip Neill: “That’s more like it! We know both Christian and the Tyco BMW  S1000RR are good enough to challenge for race wins, however various factors have made this a difficult year for us. The results today feels like a victory and all credit must go to Christian, our hard working crew and out technical partners for the continued support.  Our job is not finished yet of course and we hope for more of the same tomorrow’”

Christian Iddon #24: “It’s mega to be on the podium. I felt really good on the first start and then it got red flagged which was a shame as we were in the lead and pulled a very slight gap.  On the restart I wanted to do the same and lead but I didn’t quite have the same rhythm and Shakey got past.
Brilliant job by the team, they had really changed the bike a lot which seems to be working, so I’m really looking forward to tomorrow.”

LIGHTNING BOOST FOR TYCO BMW AND IDDON IN SHOWDOWN FINALE