LIGHTNING BOOST FOR TYCO BMW AND IDDON IN SHOWDOWN FINALE

The British Superbike Championship finale at Brands Hatch saw Tyco BMW end the season on a high with a hat-trick of podiums and the Rider’s Cup. Christian Iddon, sporting his racing hero inspired ‘Lightning McQueen’ helmet design, was on the podium twice with two second places.

Irishman Josh Elliott won a hard-fought third place in the Pirelli National Superstock 1000 race, once again placing himself and the Tyco BMW team back on the box.

The Tyco BMW team would like to extend their great appreciation to BMW Motorrad, Tyco Security products and all their sponsors and technical partners, all of which are invaluable to the team effort. Also a big thanks to the Racesafe marshals, BSB staff and all who help to put on the most competitive Motorcycling Championship in the world. 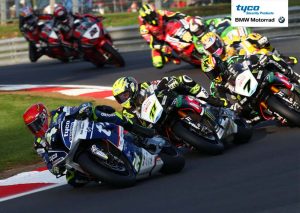 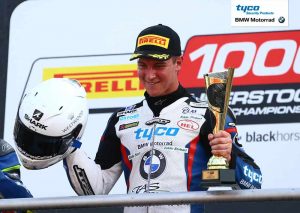 Team Manager Philip Neill: “’After a difficult season through injury this was a very nice way to end our British Superbike season and to thank our partners Tyco Security Products and BMW Motorrad. It goes without saying without their support together with each of our sponsors and technical partners we would not have the opportunity to be here.  Thanks also to our team members and each of our riders for all their efforts throughout the year.  Finally to the BSB team for organising the best race series anywhere.”

Christian Iddon #24: “Winning the Rider’s Cup is personally not a great acheivement as it means I wasn’t in the showdown but it is hopefully some payback to the Tyco BMW squad who have really given me their all this year as they did last year.  We shall all work hard to make sure we are in a good place to fight for the Championship next year.

It’s a shame how the middle of the season panned out but it’s great to finish the season on a high, we raced well and the boys gave me a great bike.  It’s definitely a direction we can go in for next season, so for me everything is positive.  A big thank you to all the team for putting a great bike underneath me, sponsors for their continued support and of course the fantastic BSB fans – see you all in 2018!”

Josh Elliott #10: “I’m Delighted to finish the season on the podium for myself and the Tyco BMW team. It was a difficult weekend and qualifying 9th gave me a lot of work to do.  We made a change for the race and it really made a big difference which gave me the chance to push forward and challenge at the front.  Massive thank you to everyone in the Tyco BMW team for their relentless effort and for giving me the opportunity to ride for the last half of the season.”

PODIUM JOY FOR IDDON IN OPENING RACE AT BRANDS