Tyco BMW and Keith Farmer started the season off positively at Donington Park by securing their first podium of the 2018 British Superbike Season in the National Superstock 1000 class. Finishing a superb second place despite difficult cold track temperatures, Farmer showed he has already gelled with the BMW S 1000 RR. Fellow Tyco BMW rider Dan Kneen also showed impressive form with a great ride, narrowly missing out on a podium position from a row three grid start.

In Superbike final free practice and qualifying sessions, the cold weather again played its part with many riders struggling to get tyres up to temperature which resulted in an innocuous crash for Tyco BMW’s Christian Iddon at Craner Curves who, with several other riders was caught out by the difficult track conditions. Michael Laverty qualified in 12th and Christian in 15th.

With the first Superbike race of the weekend moved forward to allow for potential worsening weather Easter Monday, the TAS Racing mechanics managed to repair Iddon’s bike in just four hours. Luckily despite similar cold weather, the race didn’t have as many incidents as qualifying with Michael Laverty finishing the opening Superbike race of the season in 10th despite some minor brake issues and Christian Iddon coming over the line in 14th. 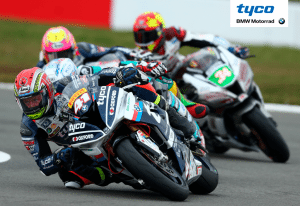 Keith Farmer #33:  “It’s been really nice to start the season off for Tyco BMW with a podium in both parts of the 100mile race here at Donington Park. During the first part of the race I suffered a problem with the quick shifter so had to switch the bike off and back on to reset it all, which meant I lost three places, I had to regroup and got back to 3rd. The second part of the race I got a lot better start and was in 4th behind my team mate Dan Kneen who has been looking strong all weekend, by mid-race I had made my way to 2nd place. I’m really getting a good feeling with the BMW S 1000 RR now, so every time we go out, we are improving and learning more. Thank you to all the Tyco BMW and TAS Racing team and hopefully today brings some decent weather to get stuck in once again.”

Dan Kneen #41:  “I was really looking forward coming to Donington for the British Superbike Championship as I love the track and testing has been going great, so I couldn’t wait to get racing. Even though I’ve had a couple of good races I feel like I have more to give but it’s great to be running up front in such a competitive class and hopefully I’ll have more opportunities to do a few more rounds”

Philip Neill – Team Manager:  “Despite the inclement weather conditions, today was a positive start to our Superstock campaign with Keith riding a sensible race with a long championship in mind and Dan arriving on the British Championship scene in fine style with a sterling performance on his BMW S 1000 RR.
Unfortunately the extremely cold conditions caught Christian out this morning. Thankfully he was largely uninjured and the Tas Racing mechanics did a sterling job to have a bike rebuilt before this afternoon’s race. Unfortunately some further problems during the race for both Michael and Christian hampered our performance and this certainly was not the season opening result our pre-season and practice form had promised. However BSB is a long season and there is much more to come from both riders on the S 1000 RR”