Tyco BMW’s hard work and perseverance was rewarded at the notably difficult Cadwell Park circuit with Andy Reid taking a P8 grid position for tomorrow’s Superbike Race 1 during a superb performance in his debut Q3 outing.

Christian Iddon will start P9 alongside Andy after an unfortunate heaving landing at the mountain section of the Lincolnshire track caused his chain to come off during Q3. Despite this the pace is looking good for tomorrow’s race with Iddon securing several laps during Q2 with times under the official circuit lap record.

Team Manager Philip Neill: “Cadwell Park can be a tricky little circuit and passing is quite difficult which makes qualifying extremely important. On one hand we were unlucky in Q3 with Christian having a chain jump off on landing from the mountain after setting some really consistent times and also confirming his one lap pace in Q2.

On the other hand we are very pleased to see Andy Reid really make his mark in British Superbikes today. The task we have set Andy so far is to learn and stay well within his limits. To be fair he has done everything we have asked and apart from a fall this morning after clipping a kerb he has consistently finished each session. Today he had the opportunity to gauge himself against some much more experienced riders and to reach Q3 in only his fourth Superbike race on the Tyco BMW is superb”

Andy Reid #18: “It’s been a great weekend so far, the whole team have been so supportive especially with it being such a difficult circuit. Having had no testing and this being my first outing on the superbike at Cadwell I am delighted to have made it through all qualifying sessions and secure a personal best P8. Thanks once again to the whole team and my personal sponsors.”

Christian Iddon #18: “I have felt good on the bike all weekend so far.  We had a strong pace throughout qualifying so it was a shame we had a very small technical, however we have good race pace so hopefully I can make early progress and have two strong races tomorrow” 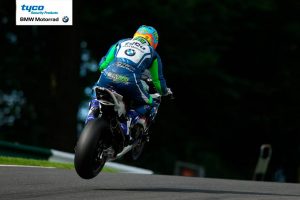