Tyco BMW have completed their five day pre-season test in Cartagena, where despite several small weather interruptions the team made the best of the spring-like Spanish climate to work through a number of technical developments on the BMW S 1000 RR Superbike and Superstock specification machines.

As conditions improved for the final day of testing, Christian Iddon clocked an unofficial fastest lap of 1’32.5s, within 0.2s of the circuit lap record.

This was the first opportunity to have each of the four riders for 2018 together with a full team and support crew line-up ahead of an exciting season in both the British Superbike Championship and International Road Racing.

Team Manager – Philip Neill: “After another busy winter period it is very pleasing to come away from our first pre-season test in positive mood. The TAS Racing technicians have worked hard on development ideas for the BMW S 1000 RR and the results are very pleasing at this stage although there is still more work to be done of course. To be honest the lap times from Spanish testing are never completely relevant when it comes to the opening BSB races and we tried to keep this in mind before we began testing, regardless of where we finished the test in lap time terms. However to have both our Superbike riders in the top three or four positions each day and to end the test with the unofficial fastest time for Christian is positive and a just reward for our efforts during the off season. Keith was also at the sharp end in Superstock times confirming the S 1000 RR is still the bike to beat in that category and Dan completed multiple laps on both Superbike and Superstock Tyco BMW machines, again with extremely pleasing results. We now have the official BSB test at Donnington which may well provide a clearer indication of our potential ahead of the opening round at Donnington Park on Easter Weekend” 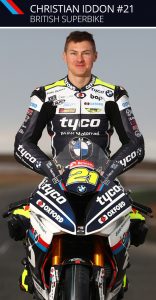 Christian Iddon – British Superbike #21:
“Throughout the test we tried various development parts which are definitely a marked step up in the places that we struggled last year.

Towards the end of the final session we worked heavily on corner entry with the electronic side of things and the team and I made a massive stride forward – the bike was so much easier to ride.  My entry was a lot faster, allowing me to roll the corners a lot more, which resulted in my fastest ever lap round Cartagena by a fair amount and ended the day topping the timesheets which is awesome. I’m feeling good on the bike and we have some good direction – it’s nice to end the test in such a positive way. Now the plan is to work hard and get more laps under our belt ahead of the first round at Donington Park. Thank you to the whole Tyco BMW team for all their hard work.”

Michael Laverty – British Superbike #7:
“It’s been a great first test for us, as a team we all gelled, with new members of staff and new equipment on the bikes. We have Donington Park test coming up where we look to confirm our findings from Cartagena. We leave here feeling content with the work we got through, our race pace was good and the overall understanding of the BMW S 1000 RR has taken a step forward. As always we will continue to work to fine tune our overall set up, I have a good feeling with my bike and look forward to getting racing in a few weeks”

Keith Farmer – Superstock 1000 #33:
“After a good five day test, I am starting to find my feet on the BMW S 1000 RR with loads of laps under my belt which has helped to adapt my style to the 1000cc bikes again. Hopefully with what we have learnt and achieved, we can have a good crack at it this year. Massive thank you to Michael, Christian and Dan for helping me learn the bike and the whole Tyco BMW and TAS Racing team for doing such a good job so far.”

TYCO BMW TEAMS UP WITH MUDBUSTER FOR 2018