It may seem like it has been a long time coming for picture hungry race fans, but Northern Ireland based Tyco BMW finally unveiled their all-new BMW S 1000 RR livery for the 2015 British Superbike season earlier today at the MCN London Motorcycle Show.

New British Superbike recruits Michael Laverty and Tommy Bridewell were on hand to unveil the new BMW Motorrad machinery, and also in attendance was the team’s Pirelli National Superstock 1000cc competitor for this season Alastair Seeley.

The double British champion will also be looking to increase his International North West 200 tally this coming May aboard Tyco BMW Motorrad machinery in the Superstock and Superbike classes with TAS Racing and Tyco BMW. 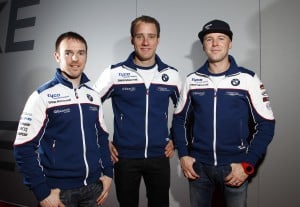 Michael Laverty: “It’s great to finally see the finished version of the bike in the new colours for 2015 and to show it off here at the London Motorcycle Show is great for both BMW and also the race fans who have turned up. I’m coming back from a couple of seasons in MotoGP which makes me even more determined to race at the sharp end all season with Tyco BMW on the all-new S 1000 RR. I’ve won a championship before with the TAS guys so I’m delighted to be back and that will be our main goal again this year. Now we have launched the bikes the first test can’t come soon enough”

Tommy Bridewell: “There’s been so much talk and it’s been exciting for everyone involved. I’ve ridden a BMW before in BSB so I know how good the package is, but to be racing with one of the leading teams now in TAS Racing and with official BMW Motorrad support should make the experience all the more enjoyable this season. The bike looks fast. I can’t wait to get it out on track in Spain in a few weeks’ time with all the Tyco BMW guys and blow the cobwebs off.”

Alastair Seeley: “I’m delighted to be part of this launch here at the London Motorcycle Show alongside Michael and Tommy and while they will be doing their best to win the BSB title, I’ll be looking to win the National Superstock class on the Tyco BMW S 1000 RR. I’ve been training hard all winter and the start of the season cannot come quick enough. I’m delighted to be back with what I regard as the best team in the paddock for both British championship and also at the North West 200.”

Philip Neill – Team Manager: “By the response of the fans here in London all the hard work has paid off and we seem to have pleased BMW with our 2015 livery. It’s been a busy winter with a lot of change for all of us at TAS Racing, but we still have the support of Phil Dashey and his team at Tyco Security Products, and all our other associate sponsors; and of course we are obviously very honoured to have been chosen as BMW Motorrad to spearhead their official effort this season in British Superbike. It’s almost time to take the bike on track in preparation for what we anticipate will be an exciting season.”

Lee Nicholls, BMW Motorrad Marketing and PR Manager, said: It gave us all great pleasure to see the fully liveried Tyco BMW S 1000 RR for the first time today on our stand at the London Motorcycle Show.

“2014 was a very successful season for BMW Motorrad in the UK and we are now looking forward to working with TAS Racing and their exciting line-up of riders in British Superbike and also on the International Road Racing scene this year.”