Tyco BMW is delighted to welcome fonaCAB as a new team partner for the 2019 British Superbike Championship and International Road Racing season. fonaCAB is regarded as the largest reputable taxi provider in Northern Ireland with a fleet of over 1100 cars and drivers. They support many initiatives that improve the lives and wellbeing of the clients they serve – including a plethora of leading sporting organisations and teams like the Belfast Giants and Ulster Rugby.

Speaking of the new partnership, fonaCAB’s CEO William McCausland said: “As a company, fonaCAB is always keen to invest in local talent, which our new partnership with Hector and Philip Neill and their Tyco BMW team allows. As BMW Motorrad’s main representatives in British Championship and also on the International Roads, we look forward to sharing their success story this season and hopefully seeing the fonaCAB livery on many podiums around the UK. In terms of the International North West 200 – where we are principal title sponsor in 2019 – this increases our brand presence and our whole team is looking forward to being involved in the May showpiece on the North Coast.” 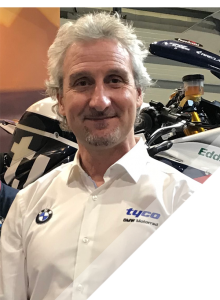 fonaCAB is well known and respected locally, not only as Northern Ireland’s premium taxi provider, but also as a leading sponsor to some of the country’s top teams and events. The fonaCAB brand presence is very strong in Northern Ireland, so we at TAS Racing are delighted to welcome them onboard. We are well aware that CEO, William McCausland, is a keen biker himself and a long-time supporter of the North West 200, where his company is the principal partner in 2019 – so we are very pleased to have been added to their portfolio of sporting partnerships, alongside the likes of the NW200 and Ulster Rugby.
Philip Neill – Team Manager

K-TECH TO PROVIDE SUPPORT FOR TYCO BMW IN 2019