Tyco BMW’s Keith Farmer took the championship lead in the National Superstock 1000 class at Oulton Park this weekend aboard the TAS Racing prepared BMW S1000RR. Despite the challenge from changeable conditions, the ‘Clougher Ace’ dug deep at the 2.692-mile Cheshire circuit and bagged a race win and a third place finish to extended his points tally to 258.5, which gives him a 10.5 point advantage over second place with just one race remaining in the Championship.

Michael Laverty was the sole Superbike rider for the Northern Irish team after Christian Iddon sustained a broken collarbone injury just one week ago, and a team decision was made following medical advice for him to rest this weekend in a bid to assist his recovery process to be in the best possible fitness for the final two rounds of the British Superbike Championship.

It was a promising start to the weekend for Michael Laverty in the Superbike class after a strong showing in a wet race one, the Toomebridge rider showed great pace picking his way through the pack and crossed the line in fifth place from a P12 grid start whilst securing a front row starting position for race two. Unfortunately a highside during lap five at Cascades saw him out of race two contention and brought an end to the weekend’s racing action for Michael.

The next round of the British Superbike Championship takes place at TT Circuit Assen, Netherlands on 28th – 30th September, with the National Superstock Championship resuming at Round 12 – Brands Hatch GP [12th – 14th October]. 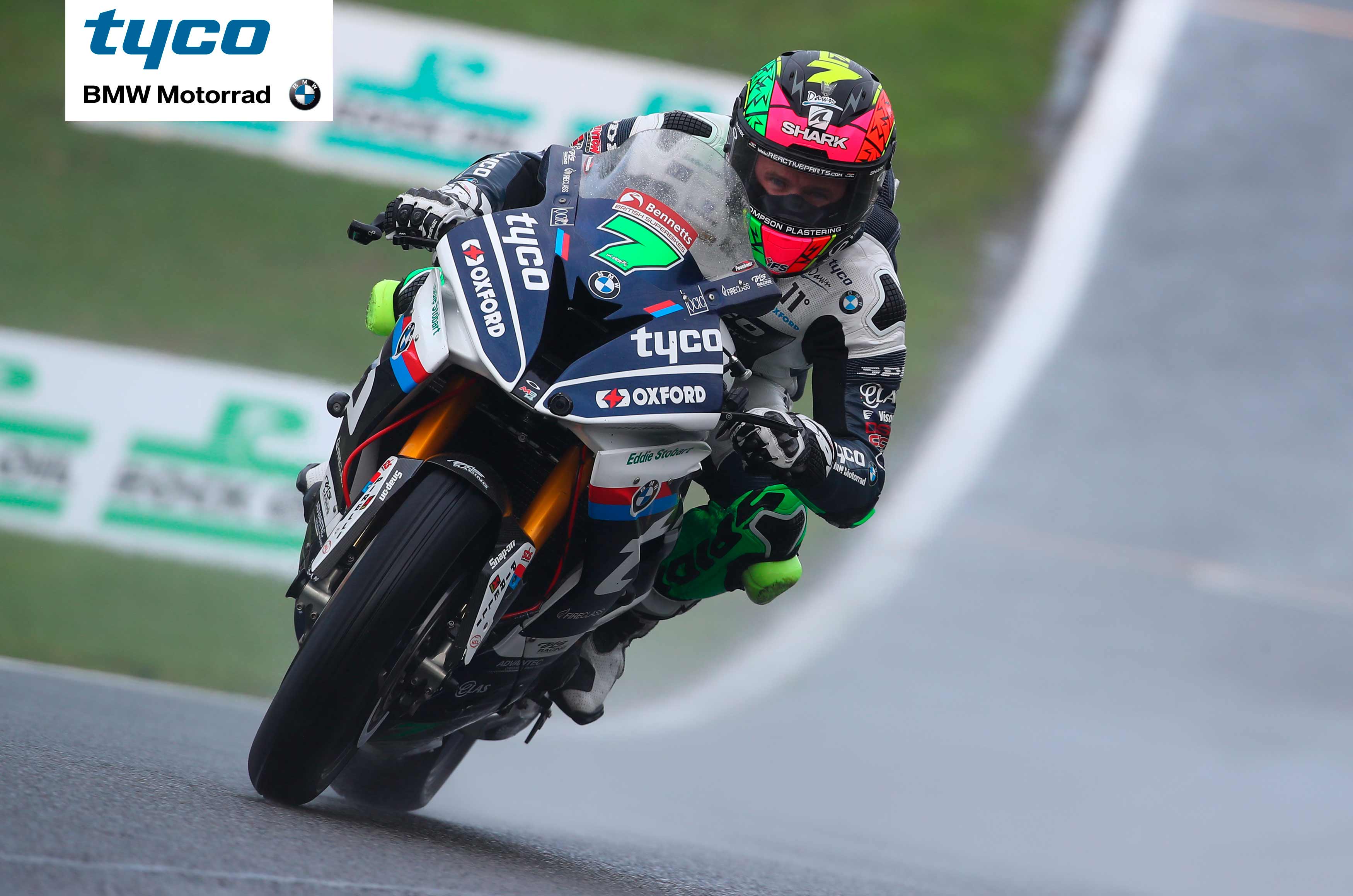 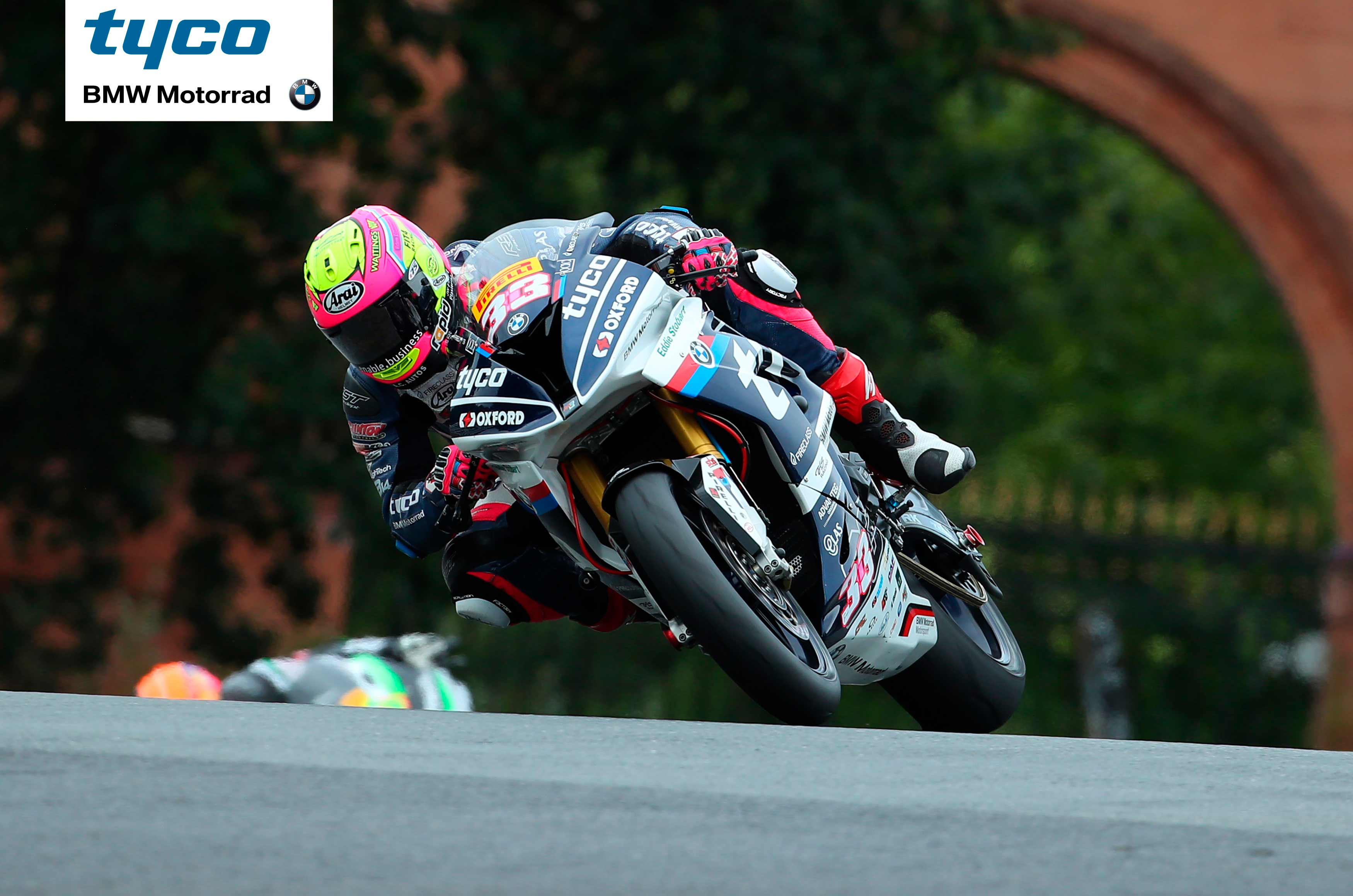 As a team we were sorry to lose Christian from his home round this weekend although it was totally understandable, the best medical advice was to rest in order to aid a full recovery for the final two rounds of the championship. With all our attentions focused on Michael and Keith they both enjoyed some success this weekend on their S1000RR’s.

After a nervous race one Keith settled into the second superstock race today and was the complete master of the tricky conditions in a BMW podium lockout. After making hard work of the championship battle recently it is good to see Keith establish a decent points gap ahead of the final round, although there is still work to be done.

Michael’s performance in race one was actually better than the end result, proven by his third fastest lap time although fifth was a very pleasing result after the problems of last weekend. It was also satisfying to see him fighting at the front in a fully dry race two until a crash ended his race, thankfully without injury.
Thanks to the Tyco BMW crew once again and to all our partners and guests who joined us at Oulton Park today.

The weather has been frustrating for everyone this weekend, we had to take a bit of a gamble with tyre choice and bike settings for Sunday’s race, but it paid off and we came away with a race win which has given us a 10.5 point advantage in the championship standings. It’s been a good weekend, all we need to do now is follow her home at Brands, I’m looking forward to getting back on the Tyco BMW for the final race of the season!
Keith Farmer #33 National Superstock 1000

We had a strong race one to finish 5th, I felt capable of more but with how the race unfolded I was satisfied with our result. Starting from the front row for race two gave us a great opportunity for a strong result, I was a little bit cautious over the damp sections in the early laps and lost a couple of positions. Unfortunately I highsided out of Cascades as I tried to up my pace to match the group and ended up with two sore knees and head tonight. We have improved the bike over the last few rounds and I few we are getting closer to those podium positions, with only two rounds of the championship remaining I hope to get us back on the box in Assen.
Michael Laverty #7 British Superbike

I didn’t ride this weekend simply because the risk and reward factor was very heavily weighted one way. It’s only a week since I broke my collarbone so obviously it’s a difficult situation and we took a decision as a team not to race with an eye to coming back competitive for the last two rounds. I came to Oulton Park this weekend to support the rest of the team and it was a strong weekend for Tyco BMW. The bike looks to be working well and I’m looking forward to getting back on it and finishing the season well.
Christian Iddon #21 British Superbike