HEROIC IDDON TAKES SHOWDOWN FIGHT TO THE END AT SILVERSTONE

Tyco BMW’s Christian Iddon fought back from injury to deliver a phenomenal performance aboard the S1000RR this weekend during the ninth round of the Bennetts British Superbike Championship at Silverstone.
The Stockport rider broke his collarbone during Saturday’s qualifying session to heroically take to the grid just three hours later and cross the line behind team-mate Michael Laverty, posting a fastest lap time just 0.7s shy of the race winner. This was superseded by a further two incredibly close races which saw the Tyco BMW rider fighting with the leading pack for the majority of the final race, narrowly missing out on a podium finish and a Showdown spot by just five points.

Michael Laverty suffered some bad luck during the weekend which significantly affected his results although he showed on a number of occasions he had the speed to run with the lead group of riders today.

In the National Superstock 1000 class Keith Farmer returned to his fine form today clinching a third place podium finish, combined with a ninth and third place finish in Saturday’s two-part endurance race despite hitting a false neutral on the grid which saw him drop to the back of the pack. The weekend saw the Clougher rider amass a further 27.5 points to add to his championship tally, just 0.5 points shy of the Championship lead.

The team are focused and looking forward to the tenth round of the British Superbike Championship at Oulton Park in less than a week’s time [14th-16th September]. 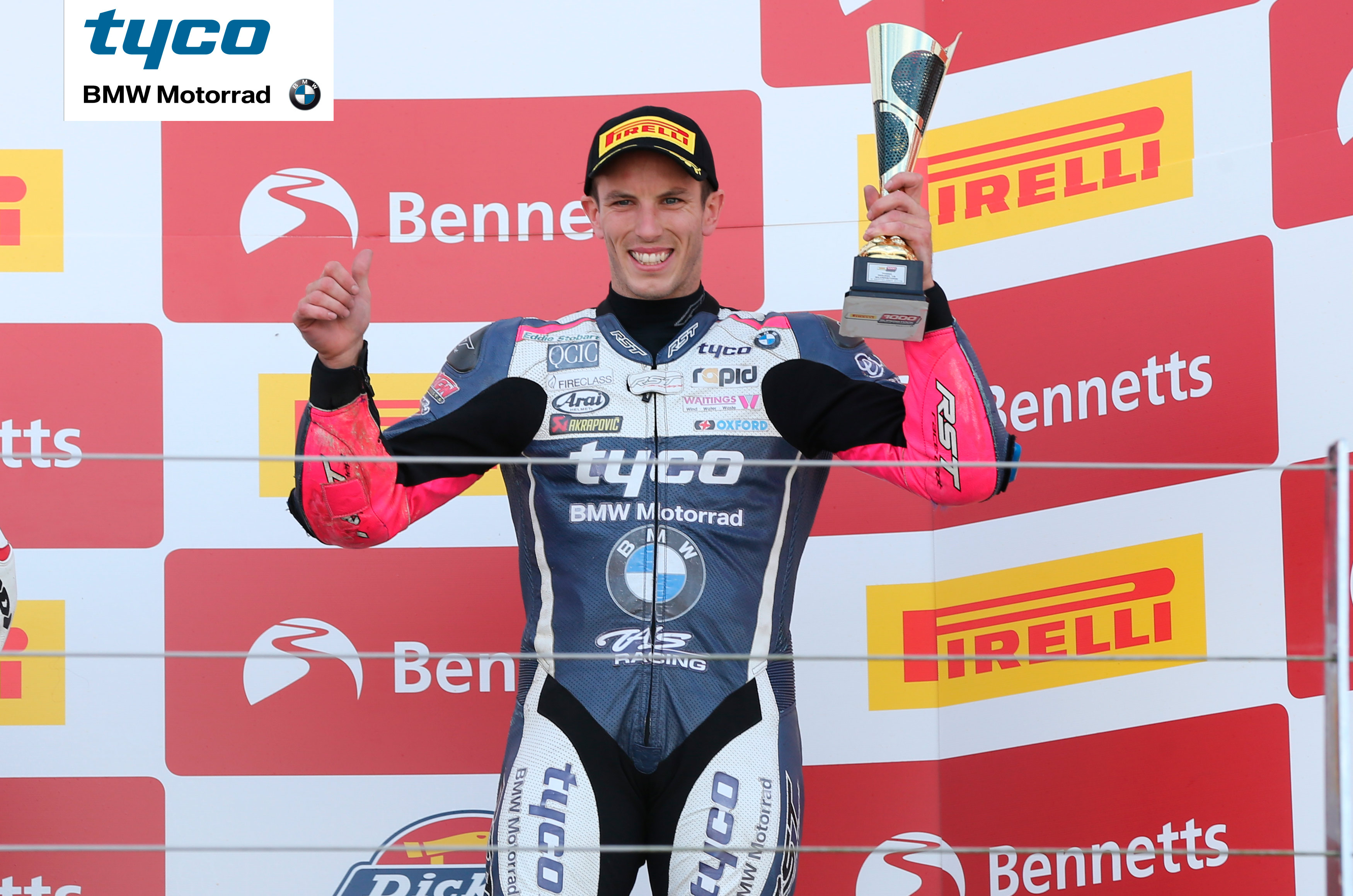 That was quite a hectic weekend with 3 Superstock and 3 Superbike races for the Tyco BMW crew.  Clearly our intention was to give everything we had to reach the Superbike Showdown and we obviously couldn’t have asked for anything more from Christian. His efforts were nothing short of heroic and he deserves every ounce of credit for his determination this weekend. Unfortunately we came up a little short in the end but after missing some races earlier in the season, it was always going to be a tough task even before the broken collarbone he sustained on Saturday.
Michael’s run of bad luck continued and as a team we feel terrible when mechanical gremlins play a part in the outcome of race results. Michael clearly showed he had great pace and I’m confident he would have played a major part in the results today without the problems he encountered.
It’s difficult to remember a more exciting Superstock championship and although we would prefer to have a significant points lead at this stage Keith did a great job in the last race today, snatching third place in the final corner to keep the points leader in sight and set up a grandstand finish for the last two races.
Thanks as always to our partners Tyco and BMW Motorrad for their support and to the hardest working crew in the paddock for their efforts.
Philip Neill – Team Manager

There was a lot at stake this weekend, so I think any rider would have ridden, everyone is pushing for the same thing but I had put myself in that position to start with so I just needed to crack on with the job and do the best I could.  The guys in the team have done a great job, the bike has been really quick all weekend. In all free practice sessions and first qualifying I was quickest down the back straight in every single session, but come race time I slipped back considerably as I could not get tucked in tight with the collarbone injury. I gave it everything that I have got this weekend, I’m disappointed that we are not in the top six as it’s a lot of hard work that goes in by a lot of people, but I will do everything I can to finish the season as strong as possible.

The support I have got has been incredible, that is a huge thing I will take away from this weekend. A big thank you to everyone for all the support, I genuinely really appreciate it, it certainly helps as a painkiller when I read through all the messages.

I don’t like to use the word luck, but we had none this weekend. I had more weird technical issues this weekend than you would usually have over a season! My boys worked hard changing an engine last night and then once again between races today but it was to no avail, despite having really strong race pace unfortunately we had 2 DNF’s.  My team mate Christians performance this weekend beggars belief, an astounding effort!
Michael Laverty – #7 British Superbike

It’s been a bit of a struggle for me this weekend as I haven’t quite had the feeling I wanted on the bike, that along with an error I made hitting a false neutral on the grid which knocked us to the back of the pack in first lap of race one. Despite this we came away with a third and a ninth place finish in the two-part endurance race, followed by a third place podium in today’s race.

We are only half a point behind in the championship lead so I’m looking forward to the next round at Oulton Park, we have previously been quite strong there and had some success. It’s only one week away, so no time to chill out or have a break, we just need to get stuck in and do a good job.   Overall it’s been great to get back on the podium, as always a massive thanks to Tyco BMW, team sponsors and personal sponsors, it’s mega to have such great support behind me with everyone rooting to get this championship wrapped up!
Keith Farmer – #33 National Superstock