Tyco BMW are delighted to confirm a new partnership with fifteen-time Isle of Man TT winner Michael Dunlop for the 2018 International Road Racing season. The 28 year old Ballymoney rider will campaign the TAS Racing-prepared Tyco BMW S 1000 RR in the Superbike class for the Isle of Man TT races and further International road racing events including the NW 200 and Ulster GP.

With multiple race wins and lap records under his belt since his TT debut in 2007, Michael’s skill and determination is without doubt and he remains the first and only rider to complete a sub-17 minute lap of the 37.73 mile mountain course. His passion for road racing is mirrored by that of father and son pairing Hector and Philip Neill, team owner and manager of TAS Racing. The Northern Ireland-based team have to date secured 27 International North West 200 victories and 18 race wins at the iconic Isle of Man TT.

The team’s official full road race schedule will be announced in the coming weeks. 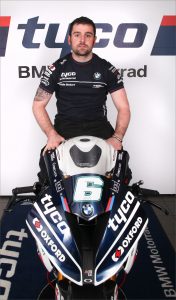 Philip Neill – Team Manager:“It has taken some time for this to come together and I’m very happy to confirm Michael Dunlop and TAS Racing/Tyco BMW will finally work together in 2018. Michael and I have discussed options to work together on various occasions and I honestly believe this is a partnership that simply had to happen at some point. Hector and I, together with all the guys at TAS Racing, are excited and looking forward to the challenge. We would not be in this position without the support of our partners Tyco and BMW Motorrad and both are extremely happy to reach agreement with Michael for the 2018 season”

Michael Dunlop: “Tyco and I have spoken many of times but nothing ever came of it, this year everything fell into place. I think it’s a good time for us both to have go at a partnership, I think both can bring something to the table and I’m looking forward to seeing the outcome”

Merry Christmas folks from everyone at TAS Racing

discount code: SUPERBIKE for 10% off any @recovapr

Great to have @apfleet Services back onboard for t

Grab a copy of @motorcyclenews featuring our all n

Check out the latest offer from our valued partner