Knockhill played host to the fifth round of the British Superbike Championship this weekend. Following a full resurfacing of the track, coupled with some glorious Scottish sunshine, the way was paved for some seriously fast lap times and provided some incredibly close racing at the 1.2669 mile Scottish circuit.

The National Superstock 1000 class was dominated by Tyco BMW’s Keith Farmer as he took to the top step twice over the weekend with an emphatic double race win aboard the TAS Racing prepared S1000RR.  The Clogher ace set a new circuit lap record in race one crossing the line with a staggering 5.065 second advantage over second place, only to better this in race two with a 48.462 second lap time and smash his own lap record in the second race of the weekend.  Claiming a valuable 50 points, Keith now leads the National Superstock 1000 championship with 145 points.

Following a successful test at the Highlands circuit the week before, Michael Laverty and Christian Iddon continued to make good progress throughout both practice and qualifying with lap times consistently in the 47s. With less than a second covering the racing field, the Tyco BMW duo proved they both had good pace on the TAS Racing prepared BMW S1000RR, crossing the line in sixth and seventh in race one, and a hard fought fifth and sixth in race two respectively.  Michael leaves the Scottish circuit increasing his points tally by 21 to place him eighth in the overall championship standings with 67 points, equalled by team-mate Christian Iddon who also stands on 67 points.

The Tyco BMW team are focused and now in a strong position to fight for a top six showdown spot as the 2018 Championship reaches the mid-way point at Brands Hatch on 20-22 July. 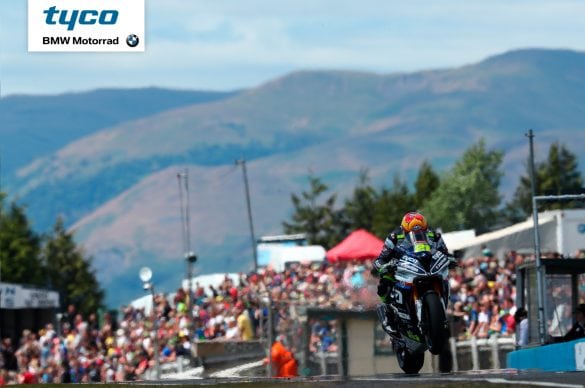 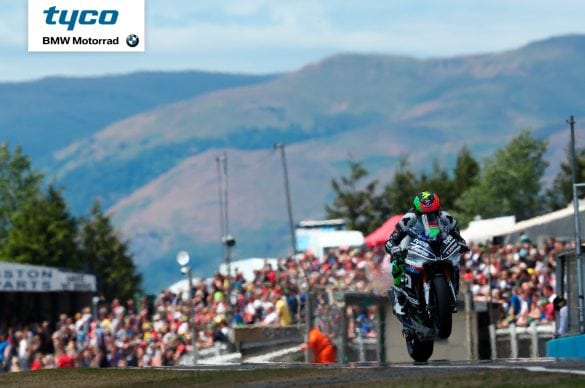 A solid weekend was exactly what we asked for and both Michael and Christian delivered exactly that, with Keith adding the bonus of a double race win. Our task in both Superbike and Superstock is clear at this point and Knockhill was a step in the right direction.  Thanks to Tyco, BMW Motorrad and all our partners for their continued support.
Of course our successes this weekend will not be celebrated following the sad loss of our close friend and former Tas Racing/Tyco BMW rider William Dunlop. Our thoughts are with William’s partner Janine the family circle and also the Temple Golf Club Team’
Philip Neill – Team Manager

We could not have done anymore this weekend, with two race wins, two pole positions and a lap record!  We started the weekend fast with really strong race pace, so was quietly confident heading into both races after setting pole position. In both races we had a similar situation, once we got into the lead, I set my own pace concentrating on my own lines and markers, then managed to pull a gap and control the race. I’m chuffed to bits with the efforts from everyone all weekend and thank you to the whole Tyco BMW team, they have done a mega job and the BMW S1000RR has just worked fantastically all weekend. We had a really successful test prior to Knockhill where I really got to grips with how to ride the bigger bike, the whole package has made the job much easier and made a huge difference finding  our ‘happy place’ in me and the bike.
Keith Farmer, National Superstock 1000 #33

We are leaving Knockhill with a decent points haul following 5th and 6th place finishes, but being honest I’m a little bit frustrated not to have the pace to challenge the leaders today. We worked hard this weekend and were strong throughout, but we just missed that last percent this weekend with the Tyco BMW to stay in podium contention. We have made some good steps forward since Snetterton and will keep working hard to take that next step at Brands Hatch next time out.
Michael Laverty, Superbike #7

I don’t think I’ve ever ridden so hard for 7th and 6th in all my life, there wasn’t a single moment in either race where I took a breath!   We kept chipping away all weekend and got closer and closer and got into Q3 which was good. I wasn’t too strong on new tyres at the start of each race, I didn’t make the most of the Tyco BMW package – but came good towards the end of both races with a strong finish.  I’m content with the weekend to take away a 7th and 6th, it’s solid amount of points and now we just need to keep working hard and aim for that showdown.

BEHIND THE VISOR – KEITH FARMER