Following his podium last time out at Brands Hatch, Tyco BMW rider Christian Iddon posted a brace of top six finishes [5th and 4th] today at Thruxton, during round seven of this year’s British Superbike Championship.

It keeps the BMW Motorrad supported Tyco BMW rider well in the hunt for a Showdown position, despite missing two rounds through injury. His BSB rookie team-mate Andy Reid continued his development process in the class, enjoying his place in Qualifying 2 for the first time, despite finishing just outside the points in today’s two races.

Tyre wear proved to be the troublesome factor for all riders at the famously abrasive Andover circuit, and despite not adding to his BSB podium tally this time around, Iddon was upbeat afterwards.

Christian Iddon #24:
Fifth and fourth are reasonably strong results, compared to where we were here last year. I’ve been pretty hard work for the team this weekend, as I knew the situation we were probably going to be in with tyres. It’s frustrating as I know I have the speed but it’s a racetrack where even if you have that speed, it doesn’t necessarily mean a lot. It felt like we were in a second tier race, where the first riders were running soft tyres so they had a double whammy of speed. I did everything I could to be at the front of that second tier. In race one we were at the front of that in fifth, then in race two we were fourth and just missed that podium.

During only his third race weekend on the Tyco BMW S1000RR, Andy Reid continued to make good progress and improved his lap times and the gap to that all-important top 15, points’ scoring finish. But the Ulsterman is learning his trade and made Q2 for the first time this weekend, which is progress in itself, in the hotly contested BSB championship.

In the Superstock 1000 class, following some early set-up issues, Josh Elliott made great strides and showed good form claiming the fastest lap in race two and a top six finish from a P12 grid position.

Andy Reid #18:
Another round and another load of laps under my belt on the Tyco BMW. We showed some good pace and progress closing that gap to the main group and those point scoring places. I enjoyed the first race despite just missing out on points; then in race two, I got a lot of spin with tyre wear, which got gradually worse towards the end of the race. Despite this, we ended the weekend strong. Once again thank you to the Tyco BMW team and all my sponsors for their support. 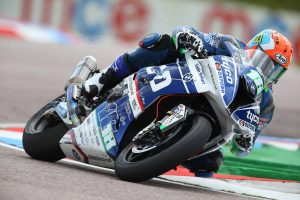 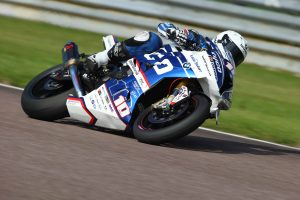 Josh Elliott #10:
It was great to finish the weekend on a positive note with the fastest lap of the race and a solid finishing position. We were struggling with set-up all weekend trying to find more rear grip, and we finally found something that worked come the final race. This is just my third race back on the Tyco BMW Superstock 1000cc machine and I think we’re getting closer to the front-runners every race, so it will be nice to progress further at the next round in two weeks’ time at Cadwell Park.

Philip Neill – Team Manager:
Thruxton is a very unique circuit and rider input is perhaps more relevant than at any other BSB venue. With everything considered, we are happy with the performance from each of our riders today and with the performance of the Tyco BMW S1000RR.

In Superbike there now appears to be a solid group of riders who will battle for the championship showdown positions and with Christian now fully recovered from his injuries, we hope to mount a strong challenge over the next two rounds, for our place in the championship’s deciding rounds.

Andy has once again showed impressive progression throughout practice and racing this weekend and he should be very proud of the company he is now mixing it with. Taking into consideration it is only his fifth outing on a Superbike.

Josh delivered another strong performance this weekend in a very competitive Superstock class. It is surely only a matter of time before he steps back onto the podium where both he and the Tyco BMW S1000RR belong.

Sadly we witnessed another racing tragedy today, our thoughts are currently with the family and friends of Mark Fincham.